Even after 13 years of living in Arizona, it is still an exciting reality that it is hot enough in October to visit and really enjoy a water park. On Saturday, October 1st, we started off the fall with a splash! (Sorry, I had to.) Sunsplash is the water park half of Golfland Sunsplash Amusement Park in Mesa. This was our first family visit to the park, and my kids absolutely loved it.
Liz Haveman

Sunsplash Amusement Park in Mesa. Even after 13 years of living in Arizona, it is still an exciting reality that it is hot enough in October to visit and really enjoy a water park. On Saturday, October 1st, we started off the fall with a splash! (Sorry, I had to.)

Sunsplash is the water park half of Golfland Sunsplash Amusement Park in Mesa. This was our first family visit to the park, and my kids absolutely loved it.

After getting tickets and going through the brief security bag check, we headed straight for Thunder Bay wave pool. The waves, which are announced by three water cannon blasts, start approximately every 10 to 12 minutes, according to a lifeguard we asked, and last for just over 5 minutes. 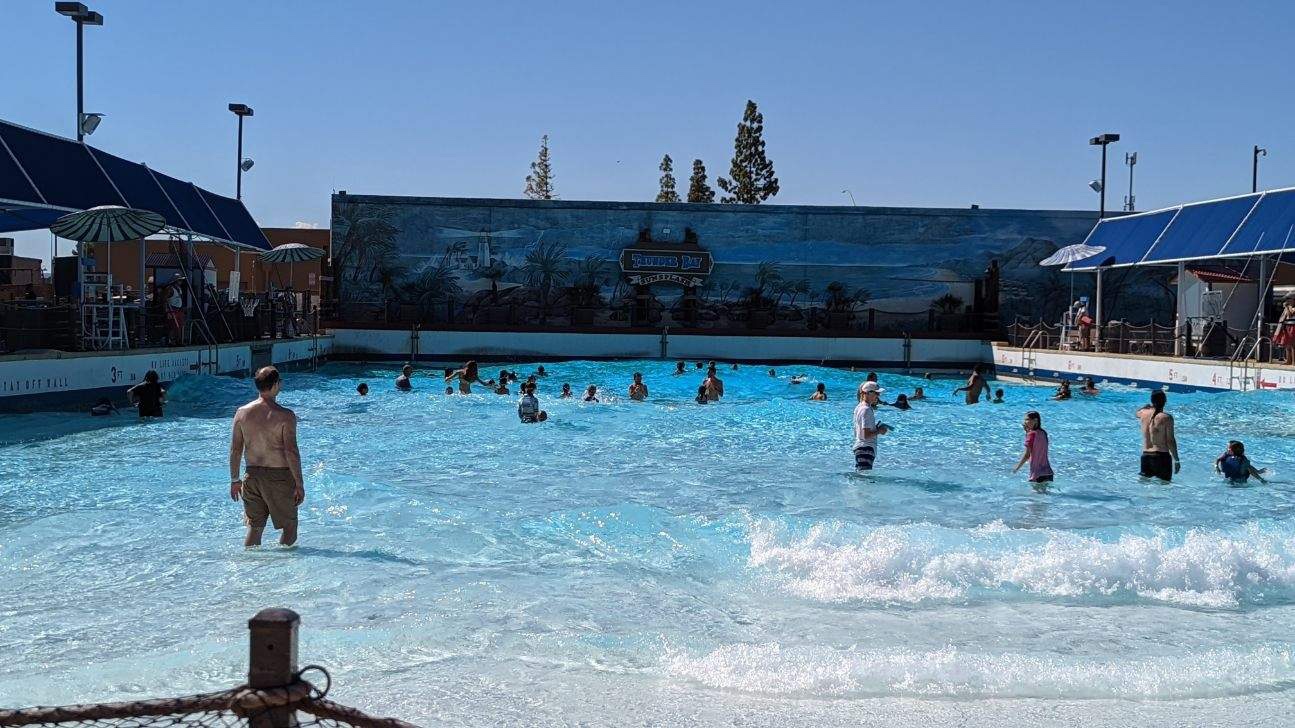 Guests under 48 inches tall are required to wear a life vest that the park has provided for no charge, and be accompanied by an adult. My kids had fun seeing who could jump over the waves and dive underneath, each taking turns being a different aquatic animal. We swam with a dolphin, an axolotl, and a puppy…because then she could doggy paddle.

We were hungry after the wave pool, so we stopped at the Oasis Snack Bar for a quick and yummy lunch of pizza, chicken, fries, and chili cheese fries. We also enjoyed lemonade and sodas. A few things impressed me about this lunch. The food came out quickly, so we didn’t waste time standing in lines. They were very generous with the chili and cheese on the fries, and I personally love that extremely healthy and totally real hot melted cheese. 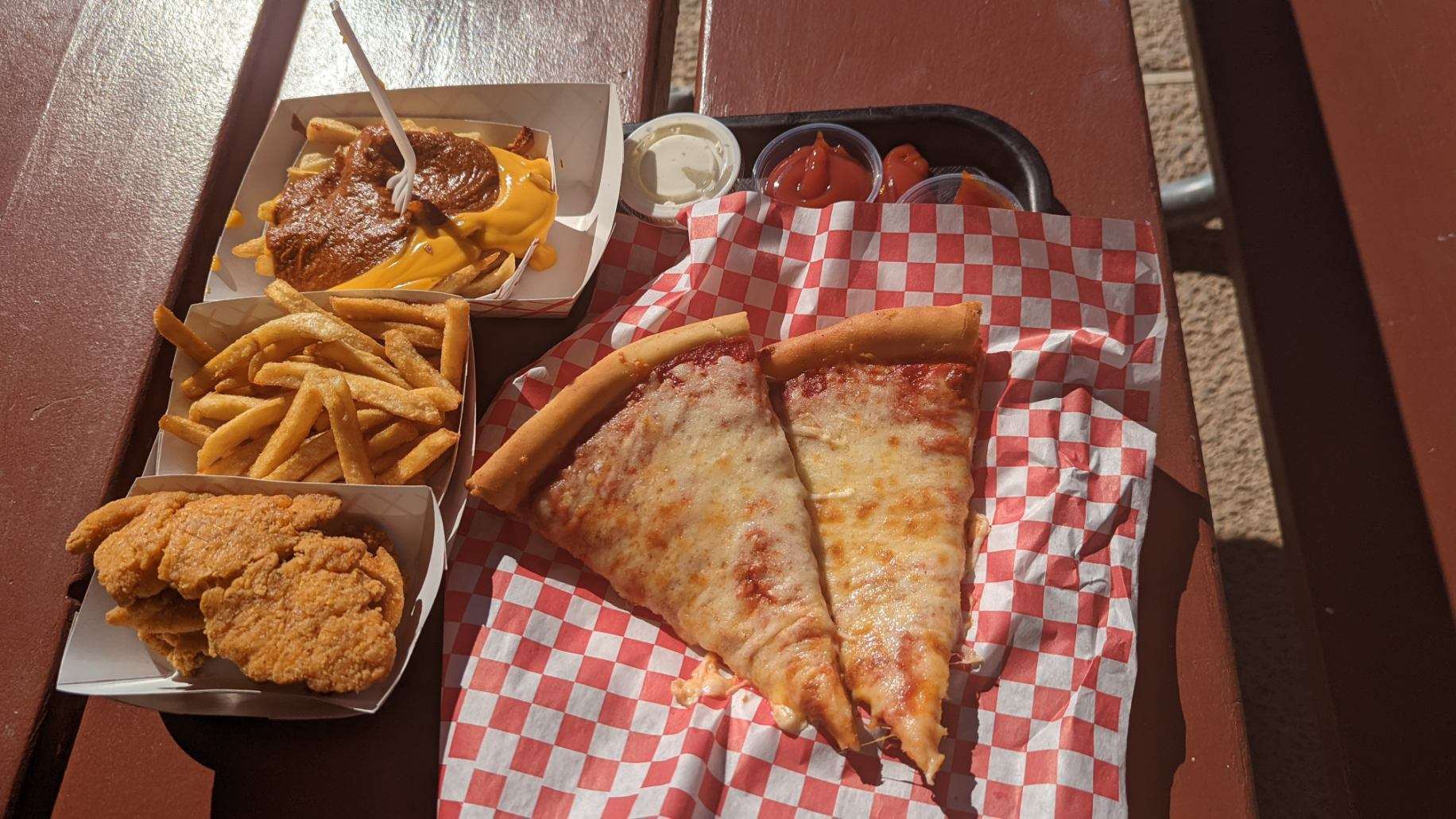 But the most surprising element was that the chicken fingers were actually chicken. They were not pressed and formed amalgamations of something that passes for food. It was actually cuts of actual chicken. Good job, snack management team!

The lazy river was our next attraction, and a very convenient way to relax and digest after filling our bellies. We drifted around twice, then headed to the lily pads in the center of the Activity Pool. After each of our children soundly schooled my husband and I walking across the lily pads, we slid down the Ship Wreck Rock Slides, then explored the Caribbean Water Works Splash Pad. This area features a whale water slide, a pirate ship with slides, tipping buckets and water cannons, and a huge 300 gallon tipping bucket that turns over and dumps a massive wave of water on the entire area.

The kids told me they loved the Stormrider water slide, but said it felt like they were being flushed down a toilet because the ride spins you around a big bowl before losing momentum and dropping you down the middle. It was thereafter lovingly referred to as, “The toilet ride.” Even though it was awesome, getting that huge, yellow, four person raft up seven stories was a deterrent to riding it again. However, it was definitely worth doing at least once.

The Master Blaster Water Coaster uses water jets to shoot you up and down and up again as your tube smoothly navigates twists and turns from dark tunnels to mesh covered openings. I personally have a hard time with heights, but I felt safe during the climb up the steps, and throughout the whole ride. 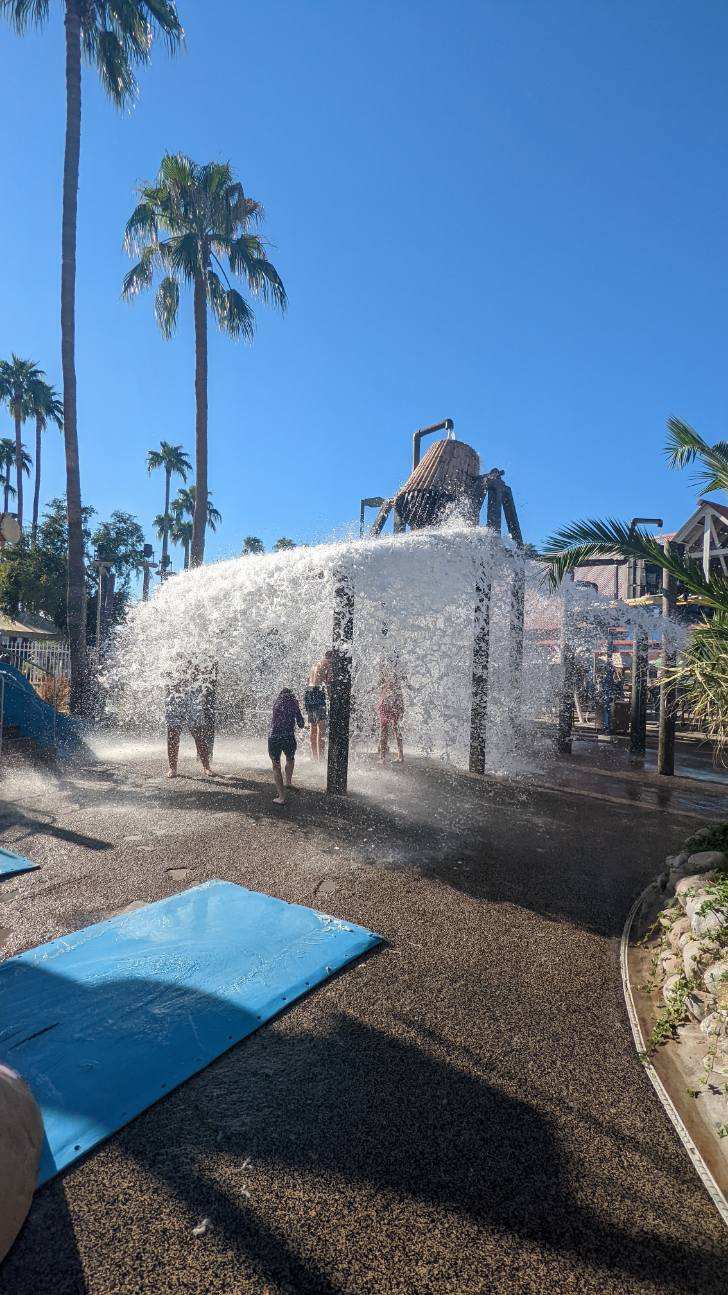 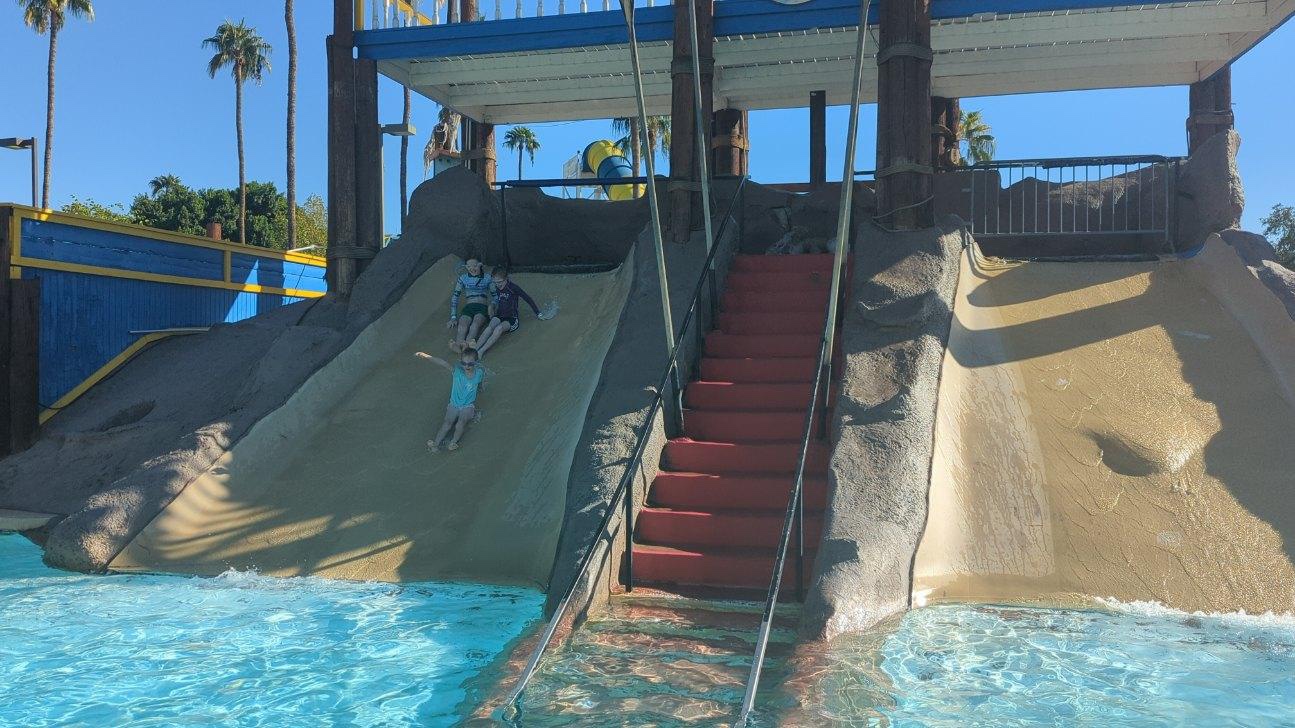 We wound up our day by cruising down the Splashwater Harbor Slides over and over again. The lifeguard handing out tubes was very nice, and kept letting guests get tubes and go up the slides up until the last moment before the park closed. I was also able to stand at the end of the pool and take pictures of my kids popping out at the bottom of the slides.

As a fun side note for all of you movie nerds.. *ahem* .. I mean, aficionados out there, Sunsplash was featured in the 1989 movie “Bill and Ted’s Excellent Adventure,” as a park called “Waterloo,” where Napoleon Bonapart enjoyed a wild afternoon in the modern world. 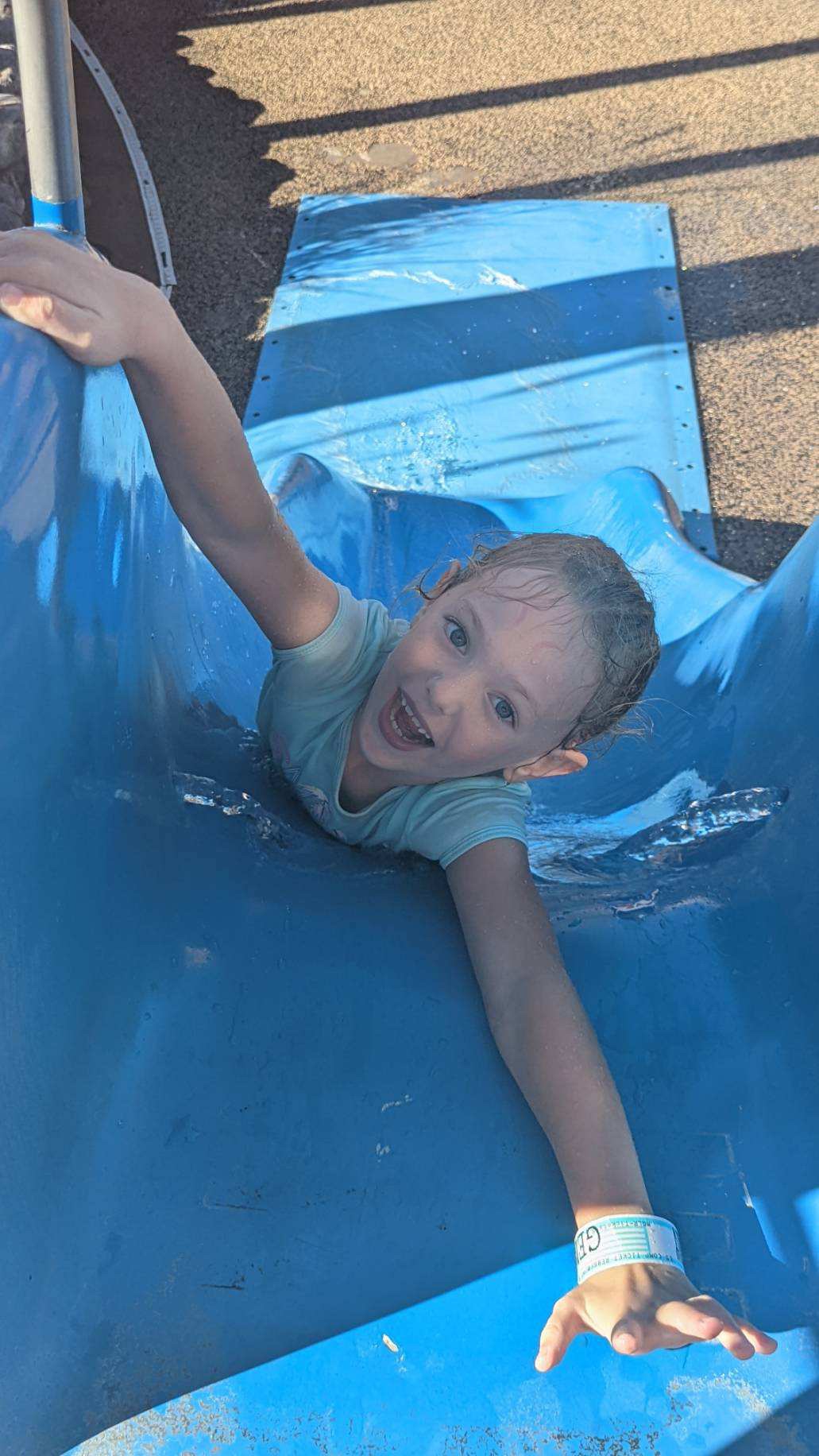 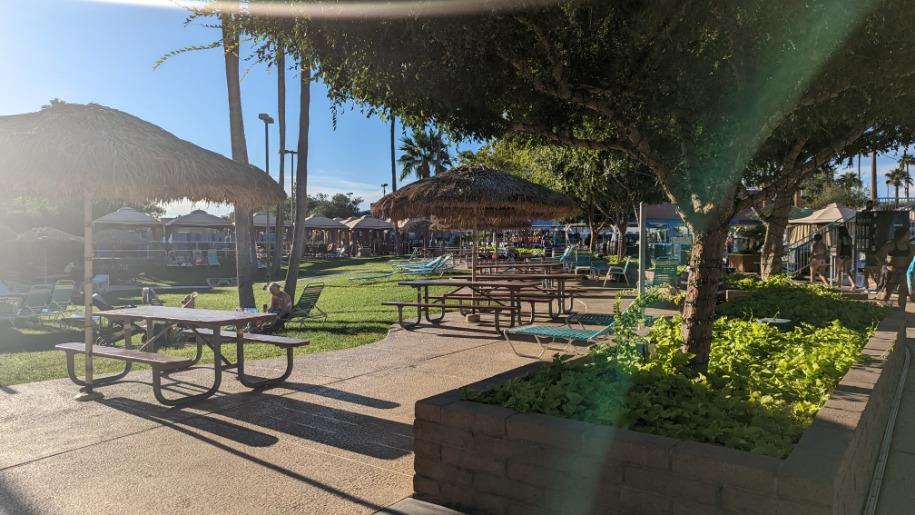 There were no lines on any of the elements the entire afternoon. Since this was our first visit, I’m assuming that might be because it’s late in the season. The water wasn’t too cold and the weather wasn’t too hot. We had a fantastic day at Sunsplash. The smell of pumpkin spice might be in the air, but don’t let the approaching autumn keep you away from one last late summer season water park adventure.

6 year old: “I loved the big water slide and the Dippin’ Dots.”

9 year old: “My favorite part about Sunsplash was getting tossed around by the big waves in the wavepool. And the best part is, there’s no undertow, so it’s safer than the beach.”

11 year old: “My favorite part was having a ride with my mama. We rode a water slide.”

More about Golfland Sunsplash can be found on their website. And don’t forget, this venue is included in the Pogo Pass! For just $49.99 with code “phoenixwithkids”, you get admission to Sunsplash, as well as the Phoenix Zoo, Uptown Jungle, baseball games, and more! More details here.

Looking for other fun things to do in Mesa? We’ve got you covered! 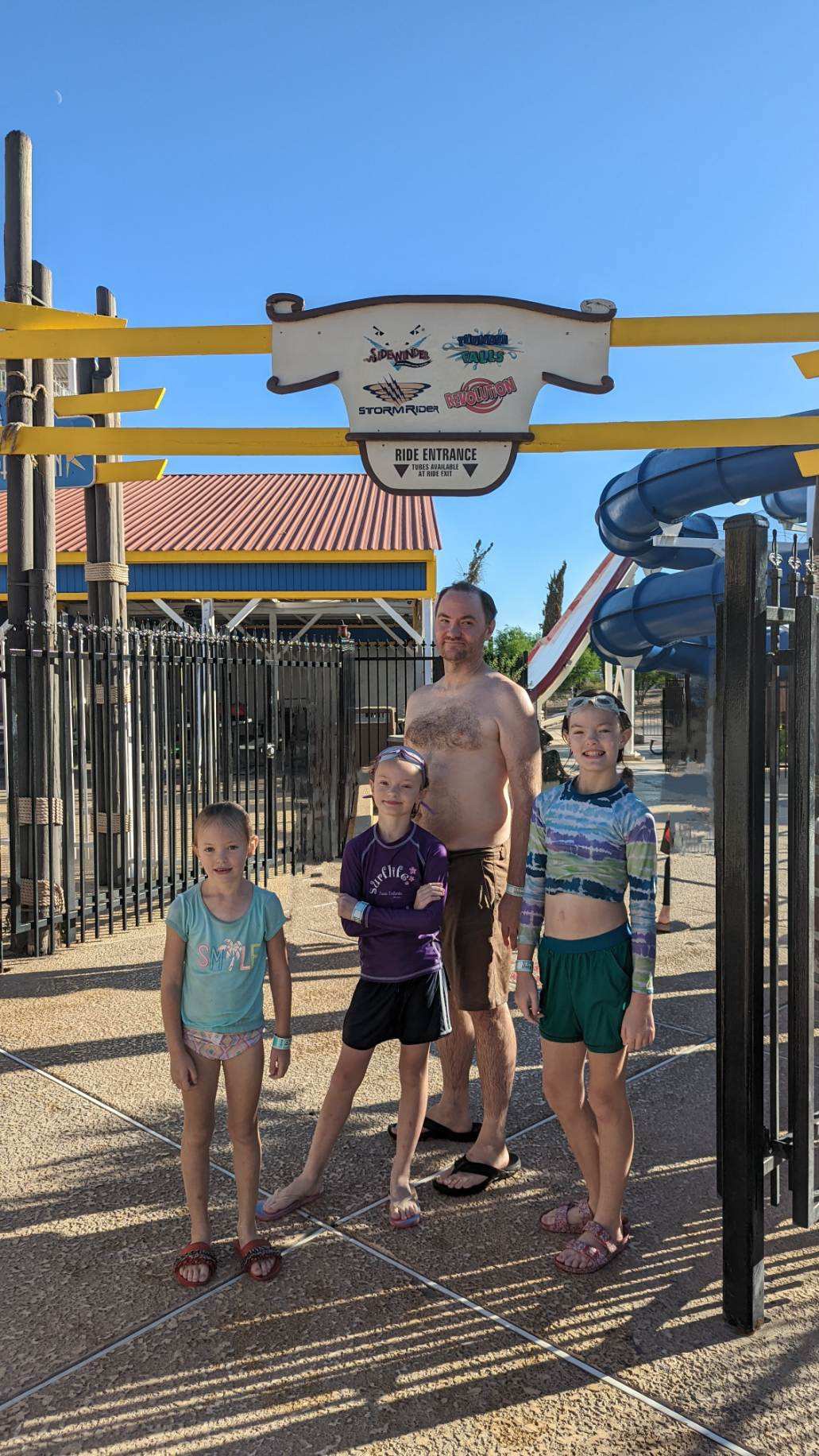